Stainless Metalcraft, a long-established manufacturer of large vessels and components for the most demanding applications, is aiming to more than triple its turnover with support from the Nuclear AMRC. 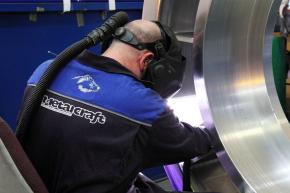 Metalcraft joined the Nuclear AMRC’s Civil Nuclear Sharing in Growth (CNSIG) programme in late 2013. CNSIG aims to develop the UK manufacturing supply chain for civil nuclear, and includes high-intensity support for 10 key suppliers. The programme is part-funded by government through the Regional Growth Fund, and supported by industry leaders including Rolls-Royce.

The start of Metalcraft’s CNSIG journey coincided with the arrival of new managing director Austen Adams. “CNSIG was a perfect fit for me when I arrived,” Adams says. “While we had a great platform to work from, we needed to realign the business to meet the modern-day needs of the industry. For me, being part of CNSIG has been like having a team of helpers to facilitate that.”

Adams has set the company a target of growing its turnover from the current £14 million to £50 million within five years. Winning new nuclear business – in new build, operations and decommissioning – will be key to growth.

Metalcraft has been active in nuclear for decades, producing vessels, tanks and other components for civil nuclear sites across the UK. It currently has supplier certification from Sellafield Ltd, Areva and Rolls-Royce.

In decommissioning, Metalcraft is the only UK supplier of remelter crucibles for Sellafield. These vessels are used in the vitrification plant to mix active waste with glass at over 1000°C – a typically demanding application for Metalcraft, which sees significant opportunities in other decommissioning projects.

In nuclear new build, Metalcraft is looking to build on its extensive experience in producing stainless and carbon steel pressure vessels. And in operations, the firm’s sister company, Walsall-based Maloney Metalcraft, has a legacy of systems installed in EDF Energy’s fleet of gas-cooled reactors. 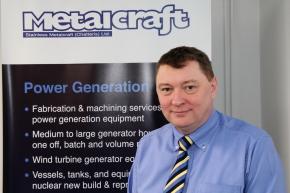 The company is also keeping an eye on opportunities in next generation technologies. “One of the core strengths of this business is our prototyping ability – we can get involved at a very early stage of development with new technology,” Adams says. “Small modular and pebble-bed reactors are exactly the kind of project that would really hit our sweet spot.”

To help achieve his ambitions, Adams led the restructuring of Metalcraft into three business units with distinct value streams. All three are now benefiting from CNSIG training and support.

The largest unit is Product Solutions, which focuses on volume work. The team has received targeted training in areas such as business improvement techniques and management, and has applied the learning to the shopfloor through a process improvement project involving a particularly challenging component.

The team has also carried out machining trials at the Nuclear AMRC’s facility in Sheffield to remove a problem with tool breakage. “The guys who went to Sheffield have made that standard practice – we’ve used the expertise in Sheffield to make real improvements,” says manufacturing manager Joe Mercuri.

The second business unit, Project Solutions, focuses on large high-integrity projects including the Sellafield crucible work. The CNSIG training has been fantastically beneficial, says business unit manager Kelvin Boyce. “We’re now doing programme management training, honing the business into the shape it needs to be for the value streams,” he says. “It’s a long process, because people have to change their responsibilities and skills sets, but it’s working well for us.”

The third and smallest unit, Proactive Solutions, focuses on short-track projects. Manager David Middlemass says that the CNSIG training has helped him get to grips with the specific requirements of the nuclear industry. “There’s definitely a sense of nuclear culture,” he says. “We’ve learned a lot about how much effort has to be put into everything.”

The target of £50 million turnover – with nuclear likely to be around 30 per cent of the total – is perfectly achievable if nuclear contracts do get placed, notes Adams.

“A year ago, we made the decision to invest in CNSIG and we’ve absolutely thrown our heart and soul into it,” he says. “We have invested an enormous amount of management time and energy, with demonstrable benefits already. We’re looking forward to the next two years as we get this embedded and start focusing on revenue growth.”

Update, 11 May: Metalcraft has announced a new contract, worth up to £47 million, to produce 3m3 waste storage boxes for Sellafield Ltd.

The first phase of the contract, worth up to £8 million, will see Metalcraft deveop a new production facility capable of producing over 1,000 boxes over the next 10 years.

“This is a landmark contract for the business and we’re genuinely excited by the potential it offers,” said Adams. “Since joining the Civil Nuclear Sharing in Growth programme just over 12 months ago, the team has invested a huge amount of time and effort to develop their understanding of the decommissioning process, honing the skills and processes required among the team, and this contract is just reward for all their hard work.”