Nuclear AMRC researchers used a range of advanced techniques to cut the time for rough milling a large nuclear forging by more than 40 per cent.

The research was part of a major investigation into innovative forging and fabrication solutions for the energy sector, led by Sheffield Forgemasters with funding from Innovate UK, the UK’s innovation agency.

Rough milling a large forged component such as a pressure vessel section can take hundreds of hours, even without the time required for set-up, movement and inspection. Reducing that time, while ensuring economic tool life and avoiding any additional manufacturing risks, can significantly increase productivity for parts with relatively high production volumes, such as components for new designs of small modular reactor (SMR).

The project focused on a large forged component representing a section of a dome, made of a low-alloy SA508 steel widely used in pressure vessels, with extensive cutting trials on the Nuclear AMRC’s Soraluce FX12000 horizontal milling machine.

The Nuclear AMRC team first considered a range of commercially available face milling tools to select the most suitable for the task. They then carried out extensive testing of the tools’ material removal performance to identify the optimum cutting conditions while ensuring the long tool life required for continuous machining of large components.

Finding the optimum conditions doesn’t just depend on the milling tool itself. “When you assemble your tool you don’t just have the face mill – you have the whole toolholder assembly,” says research engineer Ozan Gurdal. “A 100mm face mill becomes 400mm long, in addition to your spindle head and possibly an extended ram. That has an effect on the process dynamics and may lead to chatter.” 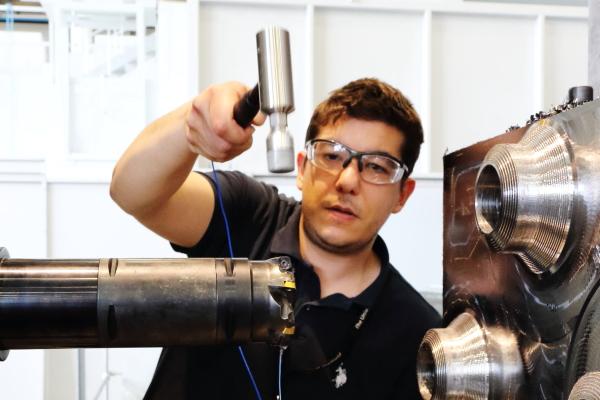 Gurdal used tap-testing to analyse the machine tool set-up – in simple terms, hitting the tool with a hammer and studying the resulting vibrations. That allowed the team to identify the vibration frequencies and regions of dynamic stability with the most productive and chatter-free cutting conditions.

“Tap-testing is a powerful technique that could provide significant cost savings compared with using conservative cutting parameters or trial-and-error tuning of cutting parameters,” notes Carl Hitchens, Nuclear AMRC head of machining and metrology. “It is common for tap-testing to identify a region of stability that is more productive than could have been found using trial-and-error, and UK industry could realise real benefits from this technology.”

The software could help increase productivity for relatively high-volume components for new designs of SMR, Gurdal notes. The Nuclear AMRC will now use the optimised cutting conditions identified during the project in its ongoing collaboration with the US Electric Power Research Institute (EPRI) to develop new manufacturing and fabrication methods for SMR pressure vessels.

After all the analysis and modelling, cutting trials on the selected toolpaths confirmed the predicted tool life and proved that cycle time for rough milling could be reduced by 41 per cent – potentially saving weeks of work for a full-sized pressure vessel section.

The team are now preparing a final showpiece using the techniques developed during the project, and aim to extend the research into finish machining. Gurdal will present part of the work at the ASME Pressure Vessel & Piping Conference in Prague in July.

The project was part of a major investigation supported by funding from Innovate UK. The £4 million, 33-month project led by Sheffield Forgemasters aims to reduce the cost, lead time and embodied energy of large forgings. Partners include Rolls-Royce, The Welding Institute, the University of Sheffield and Sheffield Hallam University, with the Nuclear AMRC providing machining and other process development support.