The Nuclear AMRC’s commitment to supporting women in engineering and research has been recognised with the Athena Swan bronze award.

The Athena Swan scheme recognises commitment to advancing the careers of women in science, technology, engineering and related fields at universities and research institutions. The bronze award recognises that an institution has a solid foundation for eliminating gender bias and developing an inclusive culture that values all staff.

“I’m absolutely delighted that the people of the Nuclear AMRC have been recognised through the Athena Swan bronze award for their dedication and commitment to providing a working environment that is free from gender bias, recognises the value of the individual, and promotes the unconditional trust and respect needed for true potential to be liberated,” says Mike Tynan, chief executive of the Nuclear AMRC.

“In a business dominated by technology, the Athena Swan bronze award is a prized possession that reminds us that our greatest asset is our people. To build a team that plays a lead role in the creation of a new era of civil nuclear power in the UK requires that talent is unleashed and is unfettered by prejudice and bias. This is the value of Athena Swan – it is a way of doing business rather than simply an award to be gained.” 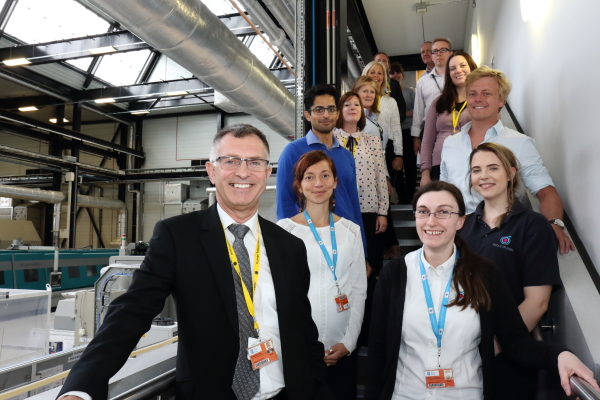 The Athena Swan application was prepared over the past year by a team from all parts of the Nuclear AMRC, led by technology researcher Dr Kathryn Jackson.

“Equality is good for the nuclear industry, it’s good for the manufacturing research, and it’s good for engineering, which are all areas where women are under-represented and where we’re at the intersection,” Jackson says. “Our remit is to help UK industry win work in civil nuclear, and the nuclear industry has got a higher proportion of men than any other power generation sector, because it’s largely a legacy workforce. If we’re leading in manufacturing research, it makes sense we should be leading the cultural change as well.”

The Nuclear AMRC will now implement the action plan prepared for the application, with the aim of applying for the Athena Swan silver award by 2020. “We’ve highlighted everywhere we’re doing things well where we need to continue, and everywhere we need to do things better,” Jackson says. “There’s a lot of work to do and there’s no shortcutting as we have to demonstrate we have made significant improvements.”

“The bronze award acknowledges that we are on a journey to excellence,” Tynan adds. “My expectation is that Nuclear AMRC will continue to improve the opportunities for gender minorities in the nuclear industry and try to ensure that we access the extraordinary talent that exists in this country to deliver innovative and safe civil nuclear power for generations to come.”